Treatment is an event that takes place in time. It has a specific start and end point. Recovery, on the other hand is not an event, but a lifestyle. A lifestyle of recovery requires continuous effort, commitment, and support.

There was a time when most treatment stays lasted 28 days. But with all the changes in the healthcare system insurance companies rarely authorize inpatient treatment anymore and when they do it is typically for stays of 3, 7, or 10 days. Right Turn-IMPACT’s treatment and recovery programs are not dictated by insurance policies and how long they determine you can stay in treatment or how much money they will pay for services. This is why all of our programs are 100% self-pay. We find that when clients invest in their own treatment and recovery they are much more likely to succeed. The longer clients are in treatment and structured recovery programs, the greater the chance for long-term, continuous recovery.

If insurance companies do agree to pay, it’s not uncommon that they’ll only pay for the treatment components of “inpatient” programs, so when clients complete treatment they leave with bills for thousands of dollars to pay for the “residential” services, food, accommodations and related ancillary services usually not covered by their policies.

Right Turn-IMPACT is not only an exceptionally effective treatment and recovery program, we are also the one of the most affordable, providing services for a fraction of the cost of other treatment centers. Most treatment centers’ fees range from $15,000.00 up to $100,000.00 for 28-30 days and include co-pays ranging in the thousands of dollars. In-House Community Living and treatment services at Right Turn-IMPACT are never more than $3,400 for 28 days. We are an excellent alternative to high-priced treatment centers and our client’s successful outcomes far supercede any treatment programs in the Maryland area.

Our goals at Right Turn-IMPACT include education, self-diagnosis, treatment, and personal responsibility. Our mission is to educate and influence people to make wise choices and avoid destructive decisions in an effort to reduce recidivism rates, improve public safety, and help save lives. We believe that any addict/alcoholic can get clean, stay clean, and enjoy a new way of life.

Merry Christmas to all from Right Turn of Maryland! ... See MoreSee Less

Treatment has a start date and a completion date.
Recovery is a lifestyle!
Right Turn of Maryland
Admissions 24/7/365 ... See MoreSee Less

You’ve probably heard sad stories about people who relapsed. Bob had 2 years and he relapsed. He took one drink went down hard, and fast. He lost everything all over again. And this time he lost his wife for good. We’ve all heard stories of relapse. Maybe it’s even been your story.

Or maybe you heard that a certain person slipped. They had a one night stand with a drink or a drug. But they managed to make their way back into recovery the very next day. It was a slip. That’s all it was.

So it got you to thinking. Maybe you could do that. Maybe you could slip. There’s an occasion coming up when no one would ever have to know. A business trip. Or the wife is going away for a couple days.

There’s no small amount of debate about that word slip. Some people in recovery really dislike that word. They get seriously bothered by it. They say there’s no such thing. A slip to them is nothing short of a relapse. Go get your 24-hour chip or key chain again. Start all over. Debates have their place I suppose. But I’d rather not quibble over words.

It’s true that people on occasion do survive the so-called slip. But famously, many don’t. One drink or drug was all it took to set them back on the path to active personal destruction. Once again they found themselves stuck in the despair of addiction.

Whether you like the word slip or not doesn’t really matter. The reality is simple. Every relapse in history began with a slip. Every trip down to a new bottom started with a single bad decision.

The lottery is a tax on people who are really bad at math. A slip is a gamble and the odds are colossal against anyone who has ever struggled with addiction. A slip is a bit like playing the lottery. With your last dollar. So is a slip worth losing it all, all over again? Think about it. For yourself.

But here’s another very important thing to consider. Maybe you slipped last night. Reading a piece like this could get you thinking, why bother? You feel so demoralized by yesterday’s bad decision that you think it’s a forgone conclusion that you’ll automatically plummet into the abyss.

Hey. While it’s still today, you don’t have to let yesterday’s failure determine today’s success. Or tomorrow’s. Whether you decide to tell someone about it or not, get a new coin or not, know this: YOU CAN GET THROUGH THIS. Just start over. Today.

I’m a fan of telling on myself. I would. I would tell someone. And it’s always better to tell on yourself before any kind of slip. Tell on yourself for even thinking about it. But that’s just me. That’s my philosophy. I know that the power of recovery community is what I need to get through any kind of trouble, large or small, before or after anything ever even happens.

So. Thinking about a slip? Think that slip all the way through. Know where it can take you. But know mostly that you never have to play with that fire in the first place.

Sanity. Let’s face it. We lost it.

“We came to believe that a Power greater than ourselves could restore us to sanity.” 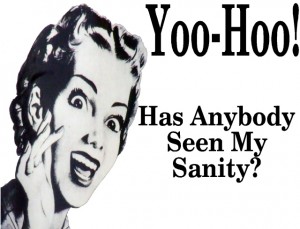 It seems reasonable to assume that the phrase, “restore us to sanity” implies something we didn’t want to admit while stuck in active addiction: Alcohol went in, sanity went out. It’s one thing to admit that we did some pretty unconscionable things. But to imply insanity?

The old Latin proverb, “in vino veritas” means, “In wine there is truth.” It’s easy to understand what that can mean: As inhibition is lowered, secrets come out. The Babylonian Talmud says: “Wine enters, secrets exit…” It continues: “In three things a man is revealed: in his wine glass, in his wallet, and in his wrath.” The point? These are things that expose the true you.

Drugs and booze exposed the truth about our condition at that time. Our hiding was futile. Obviously, we didn’t tell the truth, but the truth was made clear, at least to everyone else: We lost all connection with sound thinking, wisdom, love, honesty, and truth to self. “To thine own self be true” was a maxim we could not keep. Let’s face it: We lost our sanity.

I was listening to an attorney make a defense for his client in court for DUI. He said, “Your Honor, alcohol went in, and logic went out, as it does with anyone who drinks too much.” Things like legal problems, losing friends, jobs, respect, trust, and the like, are all signs that a person is “losing it.”

It’s easy for many people to forget the rest of the Latin proverb. The phrase is often continued thus: “In vino veritas, in aqua sanitas“, meaning, “In wine there is truth, in water there is health.” Maybe the second half of the proverb isn’t quoted as much because wine will always seem sexier than water. But water is essential to health. 70% of your body agrees. The greatness of recovery is that it’s healthy for anyone regardless of their background.

The restoration of our sanity means that we get to regroup, recoup, and realize our real potential. But this requires “a Power greater than ourselves.” Many of us have balked at this notion. But our best thinking in active addiction got us in the mess we found ourselves in. There a higher way and a power greater than ourselves. We’ll talk more about that in the next post. Stay tuned.